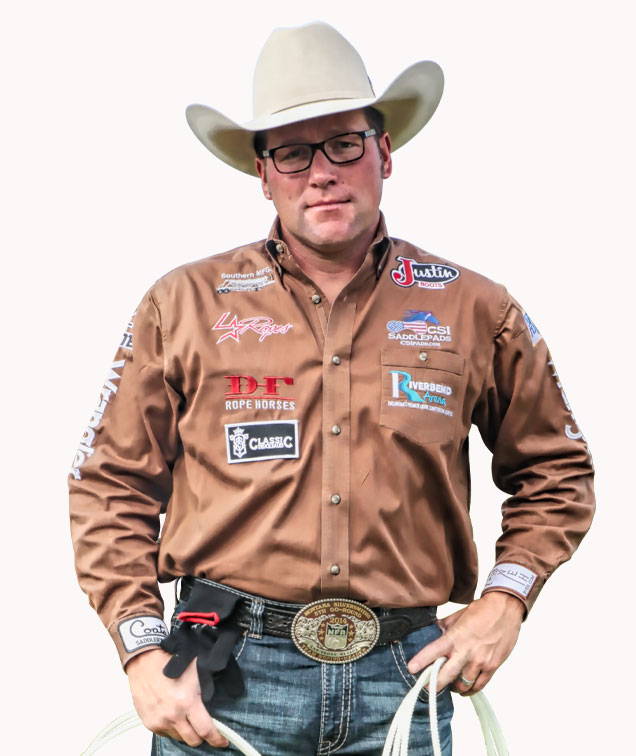 IN HIS OWN WORDS

“That was my first
big victory," Proctor
says of the George
Strait Team Roping Classic in 2010. "It just
showed what I could
do. It confirmed that
all I’d done hadn’t
been a waste of time.”

If you’re not busy - and you receive an invitation, of course - you won’t want to miss Coleman Proctor’s fantasy dinner party. For starters, the food will be catered by J.L’s in Pryor, Oklahoma, home of the “best barbecue money can buy.” It’ll be the day before Thanksgiving, and all of the guests will have just roped. A game of 10-point pitch is on the agenda, too. Invitees include Jesus, Dave Chapelle, Matthew McConaughey, Will Ferrell, and Vince Vaughn. Also old-school rodeo legends Leo “The Lion” Camarillo, Tee Wollman, Jack Barnes, and his father-in-law, Garey Arnold.

With $1,187,439 in career earnings and six trips to the NFR, Proctor obviously takes his craft seriously. But he also likes to laugh. Exhibit A: the guest list. Exhibit B: Shooting the breeze with the Savior of the world.

“You know what I would ask Jesus?” Proctor says. “Why the horse flies? Did Noah mean to put two of them on the ark?”

The rodeo veteran’s infectious personality is on full view in his social media video series, “Toter Tales.” In selfie-style clips, Proctor shares insight about life on the road, sends heart-felt thank you's to his supporters, and expresses the agony and ecstasy of following his Oklahoma Sooners football team.

“I don’t even remember what I was doing, but I don’t like typing so it’s just easier for me to make a video,” Proctor says. “Because of my schedule, there are a lot of family members that haven’t seen me in a long time.”

It’s no wonder. Proctor has been busy. He’s competed in nearly 80 events in the past 12 months and worked hard with partner Logan Medlin through September to qualify for the NFR. The mental toughness it took

Whatever happens in Las Vegas in December, the highlight of his career will most likely remain the George Strait Team Roping Classic in 2010 with his best friend and then partner, Jake Long. The two lifelong pals bested more than 465 teams to take first.

Proctor grew up in Miami, Oklahoma, part of a family that saw his mom, dad and both sisters rope. He entered his first roping contest when he was 9. He admits to not a typical teenager, procrastinating and sometimes losing focus. He has advice for teenage Coleman.

“You can work on all your basics,” Proctor says. “But the mental game is the most important part."